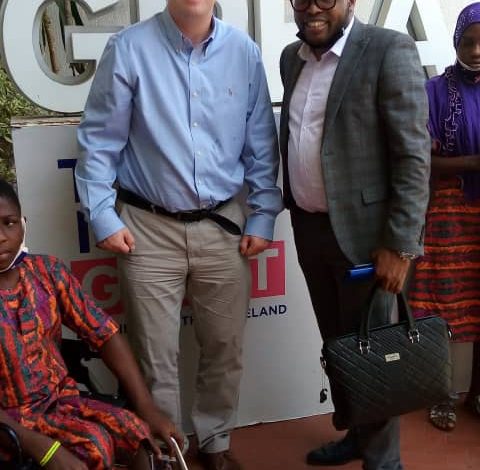 The British Deputy High Commissioner, Mr. Ben Llewellyn-Jones, has lauded the efforts of frontline humanitarian, and Founder, Focus on Disability Foundation, Mr Abiodun Paseda, who has taken it upon himself to tend to the needs of people living with disabilities, describing him as a selfless person.

Mr. Llewellyn-Jones made the assertion while receiving the Mr. Paseda and a delegate of people living with disabilities, who paid him a courtesy visit in his Queens Drive, Ikoyi, Lagos residence penultimate weekend.

Speaking glowingly of Paseda’s giant strides in the field of humanitarianism, Llewellyn-Jones, who fondly watched video clips of the Foundation’s activities, said the High Commission will partner with the Foundation, and identify areas of assistance so that the work of humanity already embarked upon by Paseda will sail on smoothly.

The Deputy High Commissioner attended the children, who were drawn from the Foundation’s lodging facility in Odogbolu, Ogun State, praising Paseda’s efforts in providing for their emotional, mental academic and physical wellbeing.

“We will do our part to sustain this lofty objective in terms of cooperation and collaboration,” Llewellyn-Jones said.

Receiving the award, a joyful Mr. Paseda, beaming with smiles, appreciated the organisers for recognizing his ‘little’ efforts in the care of humanity through those living with disabilities.

Based in London, England, Mr. Paseda, who was crowned with a prestigious humanitarian honours for his contributions by the Ceebee Gold Foundation, is the Chief Executive Officer, Focus on Disabilities (FOD) Foundation, a not for profit organization that is saddled with the responsibility of seeing to the wellbeing of those living with disabilities.

The organization, founded in 2010, has supervised the provision of sundry humanitarian assistance to people living with disabilities across Nigeria and the African continent with special mention to England, his place of residence.

He is a stern believer in the lifting of the downtrodden in the society.

“Disable people are the most neglected in the world, especially in Africa. There were no disability laws to protect them as in the UK and other European countries. This aroused my passion to help them and other less privileged.”

A recipient of the BEFFTA Award, Africa achiever Award, Scotland among many others, Paseda has since 2012 been distributing movement enhancing materials to the disabled across the continent. Some of these distributions include 60 wheel chairs and disability aids in Kano and Kaduna states in 2012; distribution of clutches, wheel chairs, food items among other things in Ogun state in March and September 2013. Ever since, the selfless giver has not looked back in supporting the less privileged with his resources.

Paseda’s humanitarian outreach stretches across Africa and the UK where he is reputed to have touched a lot of lives.

The man who humbly admitted that he learns everyday, is also a generous and selfless giver.

“I will continue the fight for the disabled until they are treated as equal members of the society, with equal rights with the able-bodied,” he said.

With the collaboration, partnership and funding promised by the renowned British High Commission, it is believed that new vistas will be opened for the children living with disabilities to live out their lives in joy and comfort.